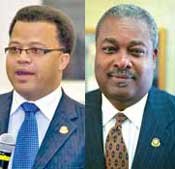 The final debate between Democratic candidates for the job of Jackson mayor will be held tonight at the Rose McCoy Auditorium at Jackson State University starting at 7 p.m.

On the roster are former Jackson City Councilman Marshand Crisler and former Jackson Mayor Harvey Johnson, Jr. The two Democrats came within 283 votes of each other—less than one percentage point—in the party primary held May 5, with neither candidate garnering the required 50 percent plus one vote to take the top Democratic spot in the general elections. The runoff between them will be held next Tuesday, May 19, with the winner meeting Republicans and Independents in the General Election on June 2.

Seating for tonight's debate is on a first-come, first-served basis, with only a few seats reserved for ticket holders. Doors open at 6 p.m.; everyone must be seated by 6:45 p.m.; no exceptions. No campaign materials, including signs, buttons or t-shirts, will be permitted. Applause or cheering will not be allowed for either candidate.

Moderating the debate and questioning the candidates will be Scott Simmons of 16 WAPT News, Eric Stringfellow of Tougaloo College and Donna Ladd of the Jackson Free Press. Crisler and Johnson will be allowed to rebut each other's responses. Immediately following the one hour debate, Bishop Ronnie Crudup will moderate a 30-minute analysis.

The debate will be simulcast on TV 23 (which reaches the local area without cable on Channel 23), Comcast Channel 14 and WAPT's digital channel 16-2; radio listeners can tune to WJSU 88.5 FM. The broadcast will also stream live on three Web sites: wapt.com, jacksonfreepress.com and jsums.edu.

The Jackson Free Press has a very small batch of tickets that will be distributed first-come, first-served today.

Someone asked for directions from downtown. It's easy, actually. Just go out Pearl (I think, right) to the Jackson State Parkway, then follow it around until you turn left on Prentiss. Rose McCoy is right down on the right corner at Lynch and Prentiss. (I did that off the top of my head; someone correct me if I got something wrong!) Come on out, y'all! It'll be a great events, there are lots of seats in the auditorium.