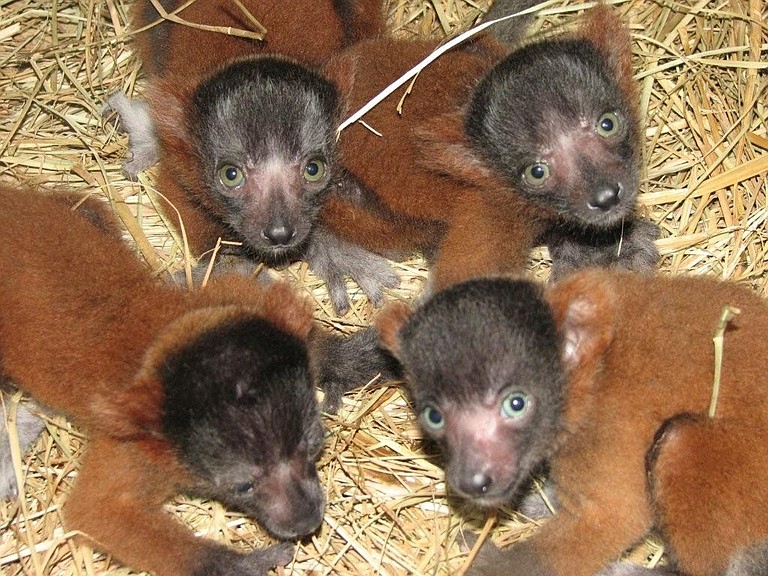 Mort, Levi, Eli and Junior, were born at the Jackson Zoo on April 19. Click the photo for a larger image. Courtesy Jackson Zoo

Meet Mort, Levi, Eli and Junior, four Red Ruffed Lemurs born at the Jackson Zoo April 19. They've been indoors with their mom, Moon, since their birth, but made their public debut last Sunday, Mother's Day.

"It's always great to announce a birth at the Jackson Zoo – not to mention four at once!" said Zoo Director Beth Poff in a release. "The animal care staff has worked so hard to make sure mom and the little ones are doing well and have everything they need. It's so satisfying to see these little ones emerge with mom, healthy and active."

Found exclusively on the Masoala Peninsula on the coast of Madagascar, Red Ruffed Lemurs are an endangered species. Moon, lemur daddy Pete and their offspring are participants in an Association of Zoos and Aquariums' Species Survival Plan. The SSP recommended breeding Moon, owned by the Duke Primate Center, and Pete, and eventually, their babies will be part of the breeding program.

Red Ruffed Lemurs live in the dense tropical rainforest and spend most of their time in the upper canopy, according to the Zoo. They are characterized by a striking dark red, black and white fur pattern. They have a prominent muzzle, short facial hair and a long, bushy tail.

It was nice to see Marshand Crisler at the ZooBrew. Glad to see the Zoo has a friend in the mayor's race.

they are cute little buggers...

So cute!! I need to get back out there to see them and the penguins!

Lemurs are such amazing creatures. I watched the kind with the striped tails at the Oakland Zoo, and they have amazingly intelligent eyes and human postures. One was slouching like a little old man.

They are also delicious! :-)

Forget not the fossa, a rapacious gobbler of lemurs. Its scientific name is Cryptoprocta ferox, the genus name of which translates roughly to obscure anus. These creatures have a pouch that covers their rectum, the evolutionary purpose of which remains elusive.