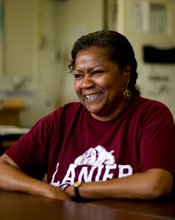 Born and raised in Jackson, Patricia Clincy Harris is the mother of one, although she considers all children hers.

Jackson Public Schools awarded Harris the honor of Parent of the Year 2009-2010 for her service and dedication to the Lanier High School community. Her son, Clincy Harris, is a junior at Lanier.

Her warm, humble spirit dispelled my first-encounter jitters when we met at Lanier on a recent afternoon. "It's a part of who I am," Harris says. As she spoke of her love and concern for the children of the community, tears rolled down her cheek.

"I want them to know that you don't have to take the scraps because you don't deserve them," Harris says.

Making it very clear that she does not want attention, nor to be in the "spotlight," Harris focuses on what she says matters the most: "our children."

As a 2008 graduate of the Parents for Public Schools Leadership Institute, Harris designed the Bridging the Gap to Graduation project, which seeks to educate students and their parents about high-school graduation requirements before they enter Lanier.

"I feel our community has not been enlightened. We have to start early; we cannot wait until their senior year," Harris says.

Because high school students must pass several subject-area tests before they can move on to the next grade level and, ultimately, graduation, the goal of Harris' project is to make parents aware of these tests early so that they can help ensure their children's success in the testing process. Harris even served as a monitor at Lanier while students were testing last week.

Harris encourages parents to encourage and motivate their children in all things they do. "Faith has brought me through, and I was not raised to give up," Harris says. "We have to pass this mentality on to our children."

In addition to working with Lanier students, Harris is also a member of the Mississippi Coalition for Underage Drinking, Georgetown Communities Association, the JPS Summer Reading Committee for the 2009-2010 school year, Parents for Public Schools and Pleasant Green Missionary Baptist Church.

"You really don't have time for many hobbies when you're a taxi for your son," Harris says, playfully. "Being a vessel of service is my hobby."

Harris invites anyone who is willing to volunteer at Lanier. "We have open arms, just please support and encourage your child," she says.