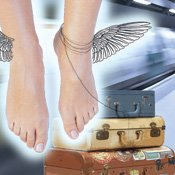 Alice cared about her neighborhood and was convinced that her "bad" neighbors across the street were into drugs. She believed that signing an affidavit against them risked her safety; Jackson police officers had come out on occasion, and nothing had changed. At her wit's end, Alice called Bev, a neighbor she knew in passing. She proposed that Bev openly take a stand about the alleged drug activity with her.

Bev had no firsthand facts about the situation—only Alice's perceptions—and was uncomfortable getting involved. The conversation deteriorated.

About a decade later, the two women were talking, and Alice brought it all up again, very angry. Bev was incredulous and racked her brain to try to remember the details of that years' ago conversation. She couldn't.

Grudges are hostage-holding, blood-pressure-raising enslavers, robbing the non-forgiver of today's precious time and life. The pain of not forgiving eats at the non-forgiver, but doesn't "get back" at the alleged wrongdoer. In fact, Bev was oblivious to Alice's seething anger until years later.

So, the non-forgiver, in effect, shackles him or herself to a past hurt and abdicates freedom to it. The source of the grudge controls the non-forgiver's emotions and life as he or she keeps going back to yesterday and forfeiting today.

Grudges corner me when I am feeling "less than" for some reason. They tempt me to focus on them instead of on the reality of my life and the self-work I should be doing. So when I can't let go of a wrong, I know that I need to look for ways to pamper, forgive, accept and love myself, because my ability to forgive others is all bound up in loving and forgiving myself.

Like Rev. Dr. Martin Luther King, Jr. said, "We are tied together in the single garment of destiny, caught in an inescapable network of mutuality."

The acts of forgiving and being forgiven are so powerful that if we could bottle forgiveness and issue it to every human being, we could solve many of the world's problems. I experienced a mysterious example of that power late in life, after having lived a lot and having made so many major mistakes that I could write a book. One night, I had a dream that literally changed me forever.

A numinous figure appeared in the dream and embraced me—physically, emotionally and spiritually—imparting forgiveness, acceptance and love so powerful that nothing I had ever done or felt had any significance any more; I was forgiven and loved immeasurably.

As I awoke, shaken to my core, I felt like I was standing at life's new starting line without all that old, messy garbage I had lugged around for so long.

Of course, I still mess up big time—I practice it every day, almost every hour—but I know that being forgiven and forgiving myself feels so good that I try to do it more often now. I'm gentler with myself.

Forgiving another can be even more powerful. The forgiver takes back control, deliberately dropping that huge baggage.

Forgiving takes courage, more courage than continuing to hold a grudge. Mahatma Gandhi said, "The weak can never forgive. Forgiveness is the attribute of the strong."

The acts of forgiving and being forgiven are like eating healthy food, taking vitamins, getting eight hours of sleep and exercising regularly. They fuel life and foster good health. It is also a miracle, any way we look at it, much like birth. In fact, it is the birth of freedom to actually live, rather than exist in yesterday's pain.

"Your Perfect Right, A Guide To Assertive Living" by Alberti and Emmons

How to Help Yourself Heal

• See a good therapist if holding grudges is holding you hostage.

• Visit the Mayo Clinic Web site (http://tinyurl.com/2rw6vj) and read "Forgiveness: How To Let Go of Grudges and Bitterness," by Katherine M. Piderman, Ph.D.

• Journal about how you think others are wronging you and why they'd do such a thing.

• Commit your self-grudges to a sheet of paper. Hold a burning ceremony, consciously forgiving yourself as the paper burns. (This is so powerful it will knock your socks off. Do it barefooted.)

• Watch forgiveness flicks, such as: "Field of Dreams," "The Green Mile," "The Color Purple" and "Pay It Forward."

• Read or re-read "The Holy Bible," particularly the New Testament Gospels, Matthew, Mark, Luke and John. Select and read a short passage. Sit with it for a few minutes, imagining you are in the passage. Walk around; smell, taste, listen. Open your eyes. Speak a sentence about the experience.