Join the Candidates for Election Results 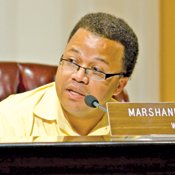 Part of the fun in voting comes when your candidate wins. Tonight, join one of the following mayoral candidates, along with supporters, volunteers and staff for an election night Watch Party.

Dorothy Benford, Eddie Fair, Brenda Scott and Jabari Toins may be hosting parties as well, but they didn't respond to our queries. If one of them is your candidate, let every one know where and when to get together by posting the info as a comment to this story.