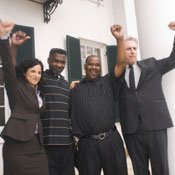 Hattiesburg dentist Dr. Michael West granted an interview with The Associated Press, breaking his silence regarding his controversial bite-mark testimony in two cases where a Noxubee County court exonerated the defendants on all charges.

West identified Kennedy Brewer's and Levon Brooks' bite marks on the bodies of raped and murdered toddlers in separate cases that occurred about 18 months apart in the early '90s. The two men spent a combined 34 years behind bars for crimes they did not commit, and they point to West's testimony, along with that of Dr. Steven Hayne, as the primary reason for their wrongful convictions.

Defense experts refuted West's testimony at the time, questioning whether bite marks could be made with only the upper jaw. Investigators found both girls' bodies in water, exposed to the elements for many days after their death. Subsequent forensic experts found that animals, insects and rough handling were responsible for the marks West and Hayne said were human teeth marks.

"I testified that both of these men had bitten these children while they were alive," West told the AP. "The bite marks were inflicted ante-mortem. As to who killed them and who raped them, I don't know and I did not testify to."

The Innocence Project took on the cases post-conviction, and used DNA evidence in the Brewer case to prove he was not the perpetrator. The same proof showed that another suspect, Justin Albert Johnson, was guilty. Johnson subsequently confessed to both killings. Brewer went free on Feb. 15, 2008, 16 years after his arrest, Brooks on March 13, 2008. Brewer, sentenced to death in 1995, spent six years on death row.

"What did I testify to that was incorrect?" West asked in the AP interview. "If they knew that they didn't kill this child and I never testified that they killed this child, where have I torted them?"

Since their exonerations, Brewer and Brooks have both filed lawsuits in U.S. District Court against West and Hayne, saying the doctors acted with malice and reckless disregard for their constitutional rights. The Innocence Project is investigating other cases where prosecutors relied on West's and Hayne's testimony.

In August 2008, Mississippi Public Safety Commissioner Steve Simpson announced that Hayne would be removed from the state's list of approved medical examiners. Hayne sued the Innocence Project in October, 2008.

So called "expert" testimony puts more innocent people in prison then actual facts ever have. Anything to get the conviction.

This is only the beginning with regard to these two!