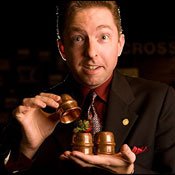 Describing himself as "America's corporate conjuror," Atlanta-based magician Joe M. Turner customizes illusions and other sleights of hand for business and community audiences around the country. And he is good! If the praise from happy clients such as the late Ed McMahon aren't enough to convince you of his master skills, let him work his magic on you during the show. Using a mix of grandiose and simple props, he will have you scratching your head in wonder. For example, Turner has performs an illusion in which he takes an empty, smashed Coke can and, before your eyes, it turns into a sealed, full can, which Turner opens and pours into a glassall in plain view. Come on, feel the magic.

He is Atlanta-based, but grew up in the Brandon area and I think graduated from Jackson Prep. I know him as a fellow member of the Mississippi Governor's School Class of 1986, and I haven't seen his show but I can tell you he his BRILLIANT.