Lemurs and Tigers and Cats 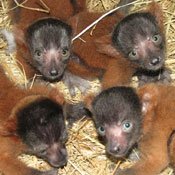 Dream Night at the Zoo lets special-needs children explore at their own pace.

In celebration of its 90th anniversary, the Jackson Zoo has spent millions of dollars on renovations. New benches, trash receptacles, improved fencing and new landscaping are some of the improvements the zoo has made for the zoo-goers. The zoo also invested in the renovation of many exhibits, including the orangutans and giraffe housing, to ensure boosted safety for the keepers and animals.

"Even though the public doesn't necessarily see these improvements, they are very important," said Chris Mims, then-marketing and public relations director.

The zoo also recently received new additions to the park's family. In April, one of the lemurs gave birth to four Red-Ruffed lemurs, which are an endangered species. The mother lemur is listed as one of the most genetically important animals in the country.

The park also has a new chimp, which marks four generations of that particular chimp family at the Jackson Zoo, and has also received a new Red Wolf that keepers hope will breed with another wolf at the park.

Jackson Zoo will soon introduce a species of cats called the Fishing Cat, and focus on the Asia area of the park. They have constructed an Asia donor wall where visitors can purchase a tile to be placed on the wall, which will be engraved with the name of the buyer.

An anticipated Gertrude C. Ford Education Center and a new tiger exhibit are also forthcoming. The education center will open in August, and feature 3,500 square feet of classroom space with exhibits in the lobby. The theme of the lobby exhibits will be "Magnificent Mississippi.

I want to congraulate the Jackson Zoo on receiving more in its collections. I hope that the zoo will improved the natural habitats of its animal collections, such as adding live, foreign plants and improving the surroundings of the habitats. For example, having an aviary that the birds can free fly around, instead of being in cages. In addition, I hope that the zoo continue to receive more species, and improving the habitats. Also, the Jackson Zoo should have lower admission prices, and some free days so more people can enter into the area. Have fun and faith in God. M Reed Chicago, IL P.S. Anyone can visit the Lincoln Park and Brookfield Zoos in my home city, Chicago,IL in the future.