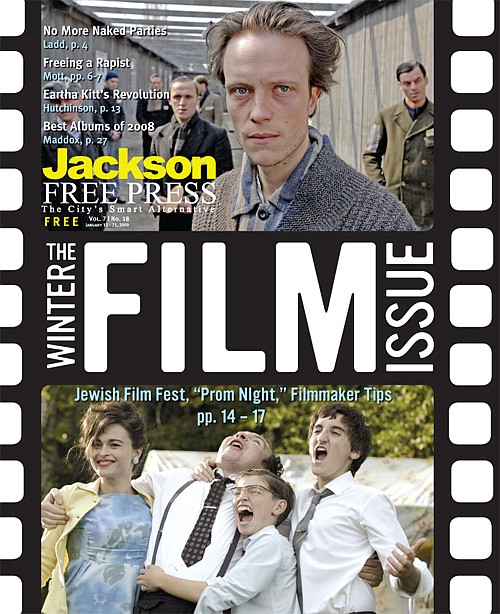 As Marcy Nessel talks about Jackson's diversity and cultural history, at moments struggling to find the perfect words to express her exact sentiment, a simple, striking fact emerges. "We all evolve," she concludes. We reflect on the past to help understand the present, yet the promise of what can be moves us forward, and consequently closer, together as people. As coordinator for the 2009 Jackson Jewish Film Festival, Nesselalong with Jewish Cinema South, Millsaps College Jewish Culture Organization and Millsaps Hillelhopes to highlight change and celebrate differences through four unique Jewish films making their rounds on the festival circuit.

The festival opens Wednesday, Jan. 21, in the Millsaps College Recital Hall with the lighthearted comedy of a young boy whose Bar Mitzvah is competing with the World Cup Final in 1966 London. Other films showing at this year's festival include "Arranged," the story of a young Orthodox Jewish woman and a young Muslim woman who develop a friendship despite their differences, and "Praying With Lior," a documentary that follows Lior Liebling, a13-year-old boy with Down Syndrome who has a profoundly special relationship with God. The film "The Counterfeiters," which won the 2008 Academy Award for Best Foreign Language Film, will also screen at Millsaps.

Based on Adolf Burger's novel "The Devil's Workshop," "The Counterfeiters" takes place in World War II Germany. After police arrest Salomon Sorowitsch, a master counterfeiter and swindler, he finds himself trying to survive in the horrific, bitter Mauthausen concentration camp. He soon uses his skill to enter the graces of the SS, working as its personal artist, and before long, the Nazis transfer him to Sachsenhausen, where they want him to counterfeit money to drain the economies of allied countries. Suddenly, the career con artist faces a moral dilemma: Support the enemy with the promise of staying alive or defy them and die.

"The Nazis actually hired him, and the plea was that he went to work for them, and they saved his life," Nessel says. "They didn't kill him if he set up what he was doing to help them raise money to support their party and what they were doing. So, it's sort of a fascinating take."

The film's director Stefan Ruzowitzky says it was very important to "narrate individual fates which don't claim to represent all victims," as he wrote in his director's statement. He and the crew paid close attention to historical accuracy, trying not to perpetuate the idea of "typical Jews" one might find in other Holocaust films. The overriding theme of the film is morality, and it's sure to be lingering on viewers' minds when they leave the festival.

Nessel hopes that viewing the festival films will help catalyze discussion among participants. "One thing that the festival wants to promote is opening dialogue and looking back at history and things that have happened and being able to relate in our current (circumstances)," she says.

Jewish Cinema South, which represents the network of Jewish Film Festivals in other southeastern cities, has taken films to Mobile and Baton Rouge, as well. While Nessel says the other two cities have a larger Jewish community, she loves Jackson's rich diversity and wants to see the entire community enjoy the films. "We want something fun and interesting for everyone, Nessel says. "Otherwise we'd just show them in the temple," she says.

After the screening of "The Counterfeiters," Millsaps Religious Studies Chairman James Bowley will be on hand.

In the links ahead, you'll find reviews of films from the Jackson Jewish Film Festival and interviews with Mississippi filmmakers who are helping keep Mississippi's door to the world evolving. Jackson filmmaker Damien Blaylock, whose most recent project followed a road trip to blues musicians' homes through the Mississippi Delta, offers advice to young or aspiring filmmakers below. On page 17, Cinematographer Don Warren talks about Sundance and his documentation of Mississippians transforming their physical health on Marathon Makeover.

The Jackson Jewish Film Festival runs Jan. 21- 25 at Millsaps College. Tickets are $10; $5 for students with an ID. Festival passes are available for $35; $20 for students, and patron passes (which include all four screenings, plus a sponsor reception) are $125.

All screenings held in the Millsaps College Recital Hall.