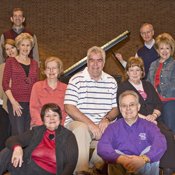 From the conductor's stand in Millsaps College's Ford Center recital hall, Timothy Coker instructs eight pianists, each sitting behind a grand piano, to turn to the song, "For People With Long Ears." At his countdownand amid a few chucklesthey attempt to play together, producing a sound resembling a donkey's hee-haw rather than a melody. With the music becoming increasingly difficult, the maestro takes a different approach to rehearsal.

"Who is the cuckoo?" he asks the pianists. "I'm the cuckoo!" resounds from an invisible pianist on the other side of the stage.

Watching their conductor's baton and playing only a few notes at a time, each pianist listens to their neighbor carefully to keep up with their own music. As one united chorus, individual pianos become two and then three, and soon they all run seamlessly together, as though one grand piano were being played and not eight.

"The first time I heard or saw anything like this was in Grand Rapids, Michigan," says Lester Senter Wilson, a world-renowned opera singer and co-producer of the Mississippi Symphony Orchestra's "88x8." "I was performing there, and saw an ad for a concert of eight pianos. Eight pianos! I knew then that I had to bring this concept back to Jackson."

Bring it back home she did. Two years ago, she and long-time musical accomplice, Timothy Coker, chairman of Millsaps College's fine arts department, produced the first "88x8" at Millsaps. To their surprise, the show was a hit, and some folks in the audience on their feet in the standing room only crowd. The symphony decided not to do the show the next year, instead wanting to "build momentum" for another show two years down the road.

Opting to move the show to a new, larger venueFirst Baptist Church of JacksonWilson says they "had to go bigger this time."

"It's classical music, but it's being performed in a stimulating, challenging and exciting way," she says. "The audience, the orchestra and the pianists themselves are all going to have a fun time."

Angela Willoughby, pianist for First Baptist Church in Clinton and music professor at Mississippi College, agrees. "This is the one opportunity for all of us pianists to get together and have a little fun. Within our denominations, we have our jobs, our schedules, and we all get way too busy. But it's been a wonderful experience to step outside of that and to work together."

"We're all friends, and this is a way for us to give back to our community as one, by coming together," Bill Wymond, pianist at First Presbyterian of Jackson, says. With the MSO, we represent not only our love of the arts, but we represent our churches as well."

"The last time we performed, we were able to raise enough for at least one 'Bravo' concert," Willoughby says. "That's almost one-fifth of the symphony's salary for the year. If we could do that again this time around Ŕ Her words fall short as Coker calls the rehearsal back to order with a few staccato notes and a new song that resembled a herd of elephantsa bright song that is part of "The Carnival of the Animals" by Camille Saint-Saëns. Wilson accompanies the piece with narration.

None of the musicians receives pay for their role in the concert, and both Coker and Wilson consider "88x8" to be their gift to the public, the musicians and the symphony. To allow others to give as well, however, they will sell "piano keys" to the public.

"My husband bought a 'high C' for meI think because he knows that I can't hit it!" Wilson exclaims."It will appear in the program the night of the performance." Coker adds that the purchase of any note is tax-deductible and includes two seats. The public can purchase music notes until Monday, Jan. 19.

To purchase a "piano key," tickets and for further information, contact the Mississippi Symphony Orchestra Box Office at 601-960-1565, or visit www.msorchestra.com. Tickets will be sold at the door the night of the performance, 7 p.m., Thursday, Jan. 22, at First Baptist Church of Jackson.