Lessons from the Animal Kingdom 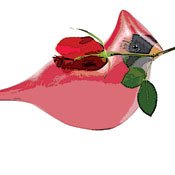 Romeo never visited the zoo. The lovelorn lad had all he needed to woo Juliet, thanks to Shakespeare's silver pen. But imagine if he flipped on the Discovery Channel and searched for guidance in the mating habits of animals. Let's consider what he might have learned:

It's true what they say about dancing.
You know, "a vertical expression of a horizontal desire." Just ask the North American Prairie Chicken. Around breeding time, these round dusky birds congregate in a lek, a sort of dirt arena for mating dances. The male birds spin in a circle while stamping their feet and inflating purple air sacs behind their heads. The females watch and pick out their very own John Travolta. Good news for guys: Males don't need a thousand different moves to win a mate. Energy, not variety, is the key. Think "the Cabbage Patch" rather than "the Soulja Boy."

Dress to impress.
Smooth moves alone aren't enough for the male blue-footed booby, a long-beaked bird native to the Galapagos Islands. When a booby bachelor spots a potential mate, he tries to woo her from afar first, often strutting on top of a rock while looking skyward. The vantage point is important, because the suitor has to show off his namesake webbed feet. The bluer these Elvis-esque appendages, the better the male's chances of winning his gal's heart.

With lions, the prized feature is a dark, bushy mane. Research shows that male lions with longer and fuller manes look healthier and, consequently, get more attention from females. Maybe the beards-and-bright-shoes look is where evolution is taking us.

If you build it, they will come.
Among Australia's bowerbirds, fancy plumage matters far less to females than good taste in interior decorating. Males compete for mates by building bowers, nest-like structures shaped like a hut or a walkway. The guys use standard material like twigs and grass, but they put special effort into finding colorful flowers, berries and feathers, even stealing them from rival bowers if necessary. The male's goal is to demonstrate his expert taste, and no two bowers are alike. Like teenagers before their high school prom, male bowerbirds will spend hours preparing their bowers, arranging each object in a specific place. When she feels romantic, the female bowerbird will visit a series of bowers, looking for the most expertly decorated love shack.

Be glad you're human.
Despite these expert tips, mating in the animal kingdom is mostlyto appropriate philosopher Thomas Hobbesדnasty, brutish and short." Female praying mantises and black widow spiders have been known to kill their mates, which is surely no way to thank a guy for dinner and a movie. The giant panda, while cuddly, has trouble moving past cuddling: Pandas are only able to mate for a few days every year, and those in zoos often need assistance from scientists in their amorous endeavors.

For every sign of fidelity and tenderness, there are countless examples of animals behaving like, well, animals. Finding a partner might be simpler for animalsexcept for the dance stepsbut it's never romantic. That's a human thing.