Last Balloon Out of Canton 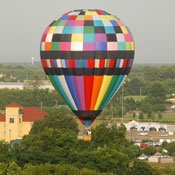 When I arrive at the Canton Equine Center early July 3, I'm sleepy. But I slowly awake as I watch hot-air balloons aficionados staring up at the rich, orange sky. I'm at the media event with Youth Media Project members Carmella States and Treshika Melvin and soon-to-be JFP assistant editor Lacey McLaughlin to collect footage of a group of midtown middle-school boys from "I, Too, Can Fly." The group, formed through the Good Samaritan Center, gives the boys hands-on experience in the world of aviation after exploring it in a classroom setting.

Lacey introduces us to Col. James Tal Anderson, or Tal for short. The retired Air Force colonel is the boys' mentor.

Tal tells us that the boys will also build their own working model plane this summer. But today they are helping unfurl a balloon, though they are too young to ride in it.

Since we had not registered with the Canton balloon officials, we try to finagle a ballooner to take us up. Eventually, Ken Johnston doubtfully tells us, "If we got room you can go," as he hurriedly prepares his truck.

The ballooners are starting at Canton High School, hoping they will be blown back to the Equine Center. Hot air balloons are at the mercy of the wind, with no control once airborne, other than higher or lower.

As the convoy departs, Ken and his crew as well as Tal and the three of us wait for the church van that is carrying the "I, Too, Can Fly" kids.

When the bus pulls up, the officer manning the barricade seems skeptical. Finally, he lets the boys and their chaperones into the area. Ken starts his car and heads for the starting point, the van following behind him. We rush to my car and speed after the bus, eventually making it to the take-off site.

There, Ken is already preparing the basket, fastening metal pins to keep it in place. Other balloons have begun inflating and taking shape. Ken's crew lifts a large sack from the trailer, but before they can start moving the deflated fabric out, Elijah Jamison, 13, jumps out to start helping.

While the other boys seem distracted, Elijah focuses on Ken and his hands as he puts together the basket, a component critical to the safety of those who will ride inside.

The boys walk the heavy balloon out as Ken directs, then his crew holds the balloon open while he pulls a lever to start the fire. Carmella films from one side of the balloon, while Treshika films from the other.

As the balloon begins to inflate, the top starts to ride as the kids hold a rope to make sure it doesn't blow the wrong way. Elijah is in front of them, closest to the balloon. The hot air inside begins to make it stand vertically.

The roar of flames inside the balloon overcomes the shouts of bored pre-teens, and they watch in fascination as a sweaty Ken resolutely starts and stops the flamethrower-like device to fill his balloon. Once it is filled, his face has subsided from toilsome to convivial.

I do an about-face, and Treshika points immediately to Carmella. Carmella shakes her head "no," but gets into the basket. She voices her safety concerns once she's in with Tal and Ken, but her smile says she'll be fine.

Soon, Ken, Tal and Carmella join the rest of the balloons in the air, looking small in the brilliant blue sky next to giant clouds in the distance. Treshika then takes on the heroic feat of riding with a dozen adolescent boys who've just eaten doughnuts to try to interview them. I drive my car back to the Equine Complex, where the balloons are scheduled to land.

I wait, and wait. I try calling Treshika, but realize she is probably busy interviewing the kids, or can't hear her phone, or worse.

I drive back to the school, looking for a trace of a ballooner. Nothing. As I'm making my way back to the Equine Center, I glimpse a church van. I drive recklessly trying to tail it, but lose sight of the white-whale-shaped van somewhere around Canton's square.

Suddenly, Treshika calls and says they are on the way to McDonald's after losing sight of the balloon. As I drive to McDonald's, I hope Carmella has made it back to Earth safely.

In the McDonald's parking lot, I catch up with Treshika, who tells me she interviewed two of the boys. The rest seemed suspicious at why adults would want to talk to kids.

We interview Kristi Hendrix, of Good Samaritan, before saying bye to the boys. I imagine our departure is something like the last train out of Saigon. We head to the Equine Center, where, hopefully, Carmella awaits.

As we pull in, we see Carmella, who excitedly tells us of her adventure, and how she and her fellow passengers shouted salutations at ground-bound passers-by, much to their confusion. Carmella says the wind took their balloon to a random field; according to other balloon pilots, this is a common occurrence.

Afterward, Lacey, Tal and Carmella are invited to be guests of honor at a ceremony celebrating their first flight.

While a ballooner explains the history of ballooning, another pours cool, bubbly beverages into three cups in front of each first-time flyer. The ballooners recite an old Irish prayer about the sky, ballooning, and where humans fit between the two.

At the end, the three first-time flyers humbly kneel and drink the cups without the use of their hands. It is to avoid any hubris accrued during their first hot air balloon ride, and it is a hoot for everyone.

Read more adventures of the YMP teens and mentors at http://www.youthmediaproject.com.