'The Business of Us All 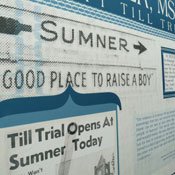 "Emmett Till" at the Smith Robertson Museum closes Monday.

On an August day in 1955, 14-year-old Emmett Till went inside a Money, Miss., grocery store to buy bubblegum with his cousin, Curtis. On his way out, newspaper clippings suggest, he turned to grocer Roy Bryant's wife, Carolyn, and "wolf whistled" at her. Four days later, on Aug. 28, Bryant and his half-brother J.W. Milam kidnapped Till from his uncle's home outside Money.

Three days later, Till's body was discovered in the Tallahatchie River. He had been severely beaten, so much so that his body was only recognizable by an engraved ring his mother had given him just before he left for Mississippi. A 100-pound cotton gin fan had been wrapped around his neck with wire, but it didn't keep Till's body down below the water's surface. Till's mother, Mamie Bradley, demanded that her son's coffin remain open during his funeral as testament to the injustice done to her son.

"Emmett Till," a touring exhibit funded through the National Endowment for the Humanities and developed through the Delta State University Archives and Museum, features 10 banners that mostly document the aftermath of Till's murder. Using collaged newspaper and scrapbook clippings, family photos, correspondence letters and court documents, the exhibithanging at Smith Robertson Museumtells the story of how the Emmett Till murder and trial shook a post-Brown v. Board of Education America and highlights the prejudices that existed not only among working Mississippians, but also its justice system.

Several court documents, for instance, instruct jury memberswho were all white mento display an acute disregard for justice. Instruction no. 1 for defendants reads: "the court instructs the jury to find the defendants, Roy Bryant and J.W. Milam, not guilty." Yet another instruction memo, no. 6, instructs the jury to work under the assumption that the body found in the Tallahatchie River was not, "as a matter of law," Emmett Till. This would, therefore, make it impossible to convict the two men for murder of a boy whose body technically had not been found.

In addition to the several fascinating court documents in this exhibit, clippings from both southern and northern newspapersblack and whitegive hints to the social climate at the time of the trial. A clipping titled "Murder Trial Publicity Irks Placid Town" seems to avoid the Till case altogether, despite it being the subject of the article. The reporter, William Street, writes about the history of Tallahatchie River, instead, only delving into the Till murder in the last two paragraphs. Editorials in black newspapers, such as the Pittsburgh Courier, railed against the culture of the South, calling Mississippi the "sin-hole of American civilization."

Letters written to prosecuting District Attorney Gerald Chatham were polarized. One postcard read, "We are watching your city to see that those two innocent white men are not prosecuted for something they didn't do." Another echoed different sentiments: "We shall avoid Mississippi unless you press murder charges against the whites responsible."

Many of these letters are riddled with grammatical errors and misspellings, yet another testament to Mississippi's broken education system at the time, which continues to haunt our children today.

After only 67 minutes of deliberating, the jury returned with a verdict. The jury found Bryant and Milam not guilty of murder.

Perhaps one of the most touching letters to Chatham comes in the wake of this decision, from an unnamed woman:

"I just heard over M.V. that Roy Bryant, and John Milam, were aquaited (sic)," she writes. "I have two small children and I don't want them to grow up in a country where two men can kill a boy, because of his color, and get by with it.  My children are going to grow up thinking that all men are equll (sic) and I want nothing nothing (sic) to change that fact.

The historical information contained in this exhibit is fascinating and inspiringthe blatant injustice echoes from each banner and hastens viewers to stand up for what is right. A quote appearing on one of the banners from Till's mother is a call to action that is just as applicable today as it was 24 years ago.

"Two months ago, I had a nice apartment in Chicago. I had a good job. I had a son. When something happened to Negroes in the South, I said, 'That's their business not mine,'" it reads. "Now I know how wrong I was. The murder of my son has shown me that what happens to any of us, anywhere in the world, had better be the business of us all."