ACORN: The Real Story, and McCain's Past Support 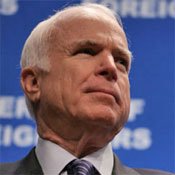 John McCain has been a close friend to ACORN in the past.

Updated with a good video below with the real ACORN story, and why false rumors are being spread.

We appreciate that Senator McCain's effort to stir up the Republican base by attacking a community organization working to increase public participation in our democratic process. However, these attacks reflect an increasingly panicked candidate; unfortunately the Senator McCain we saw tonight is very different than the Senator McCain who stood shoulder to shoulder with ACORN at a February 20, 2006 immigration reform event."

"It is clear for us to see that John McCain was for ACORN before he was against ACORN; he was for reform before he was against reform; and he was a maverick before he became erratic. What is really going here is that Senator McCain and his allies are part of a coordinated effort to engage in what appears to be an unprecedented effort to suppress voter turnout Repeating a lie doesn't make it true, and the McCain campaign has resorted to the worst type of deceptions in regards to ACORN."

- ACORN has helped 1.3 million citizens from all parties and all walks of life apply for voter registration.

- In most states, ACORN is required by law to turn in every voter registration card - even in cases where the cards are not valid.

- It is ACORN that has reported almost all of the issues regarding voter registration cards.

- Invalid voter registration cards do NOT constitute voter fraud. Even RNC General Counsel Sean Cairncross has recently acknowledged he is not aware of a single improper vote cast as a result of bad cards submitted in the course of an organized voter registration effort.

- ACORN hired 13,000 field workers to register people to vote. In any endeavor of this size, some people will engaged in inappropriate conduct. ACORN has a zero tolerance policy and terminated any field workers caught engaging in questionable activity. At the end of the day, as ACORN is paying these people to register voters, it is ACORN that is defrauded.

Hendrik Hertzerberg summarizes the scam against ACORN very well this week: During this election cycle, the Times reported today, ACORN has deployed thirteen thousand mostly paid workers, who have registered 1.3 million new voters. One or two per cent of these workers turned in sheaves of forms that they filled out themselves with fake names and bogus addresses, and, even though at least a hundred of these workers have already been fired, the forged forms have been submitted to election boards. Sounds suspicious—unless you know that groups like ACORN are required by law to submit them, even if they’re obvious fakes. This is to prevent funny business, such as trashing forms that look like they might be Republican (or Democratic, as the case may be). Sounds suspicious—unless you know that ACORN normally sorts through forms, flags those that look fishy, and submits the fishy ones in a separate pile for the convenience of election officials. Sounds suspicious—until you reflect that the motivation of the misbehaving registration workers is almost always to look like they’ve been doing more work than they really have, and that the victim of the “fraud” is actually the organization they’re working for. Sounds suspicious—unless you know that even if one of these fake forms results in a nonexistent person actually being registered, now under the Help America Vote Act of 2002, “any voter who has not previously voted in a federal election” must provide identification in order to actually cast a ballot. This will make it tough for Mickey Mouse, even if registered, to vote, no matter how big, round, or black his ears. Likewise, members of the Duck family (Donald, Daisy, Huey, Dewey, and Louie) who turn up at the polling place will have a hard time getting into the voting booth. (Uncle Scrooge might be able to bribe his way in, but he’s voting Republican anyway.) Sounds suspicious—unless you know that despite all the hysteria, from 2002 to 2005, only twenty people in the entire United States of America were found guilty of voting while ineligible and only five of voting more than once. By contrast, consider the lede on this story, published a week ago today: "Tens of thousands of eligible voters in at least six swing states have been removed from the rolls or have been blocked from registering in ways that appear to violate federal law, according to a review of state records and Social Security data by The New York Times."

Bob Herbert today on the Republican ACORN lie: The Republican Party has made strenuous efforts in recent years to prevent Democrats from voting, and to prevent their votes from being properly counted once they’ve been cast. Which brings me to the phony Acorn scandal. John McCain, who placed his principles in a blind trust once the presidential race heated up, warned the country during the presidential debate last week that Acorn, which has been registering people to vote by the hundreds of thousands, was “on the verge of maybe perpetrating one of the greatest frauds in voter history.” It turns out that a tiny percentage of these new registrations are bogus, with some of them carrying ludicrous names like Mickey Mouse. Republicans have tried to turn this into a mighty oak of a scandal, with Mr. McCain thundering at the debate that it “may be destroying the fabric of democracy.” Please. The Times put the matter in perspective when it said in an editorial that Acorn needs to be more careful with some aspects of its voter-registration process. It needs to do a better job selecting canvassers, among other things. “But,” the editorial added, “for all of the McCain campaign’s manufactured fury about vote theft (and similar claims from the Republican Party over the years) there is virtually no evidence — anywhere in the country, going back many elections — of people showing up at the polls and voting when they are not entitled to.” Two important points need to be made here. First, the reckless attempt by Senator McCain, Sarah Palin and others to fan this into a major scandal has made Acorn the target of vandals and a wave of hate calls and e-mail. Acorn staff members have been threatened and sickening, murderous comments have been made about supporters of Barack Obama. (Senator Obama had nothing to do with Acorn’s voter-registration drives.) Second, when it comes to voting, the real threat to democracy is the nonstop campaign by the G.O.P. and its supporters to disenfranchise American citizens who have every right to cast a ballot. We saw this in 2000. We saw it in 2004. And we’re seeing it again now. In Montana, the Republican Party challenged the registrations of thousands of legitimate voters based on change-of-address information available from the Post Office. These specious challenges were made — surprise, surprise — in Democratic districts. Answering the challenges would have been a wholly unnecessary hardship for the voters, many of whom were students or members of the armed forces. In the face of widespread public criticism (even the Republican lieutenant governor weighed in), the party backed off. That sort of thing is widespread. In one politically crucial state after another — in Ohio, Michigan, Wisconsin, you name it — the G.O.P. has unleashed foot soldiers whose insidious mission is to make the voting process as difficult as possible — or, better yet, impossible — for citizens who are believed to favor Democrats.

Associated Press with the real ACORN story: McCain is correct that at least a handful of ACORN canvassers are currently being investigated across the country by local officials on suspicion of submitting false registration cards, some with names like "Mickey Mouse" or "Donald Duck." But in alleging voter fraud, McCain goes too far. To commit fraud, a person would have to show up on Election Day with identification bearing the fake name. The group, the Association of Community Organizations for Reform Now, recently completed a massive registration drive in poor and working-class neighborhoods — which tend to vote Democratic — across 21 states, signing up 1.3 million new voters. Bogus registration cards filled out in the names of cartoon characters and the starting lineup of the Dallas Cowboys have been targeted for investigation in about 12 states, including Ohio, Pennsylvania, Florida, Missouri, Nevada and South Carolina. ACORN, which advocates for the underprivileged, has said for days that it was its own quality-control workers who first noticed problem registration cards, flagged them and submitted them to local election officials in every state that is now investigating them. ACORN hires canvassers from disadvantaged communities, pays them $8 an hour and provides them with a day of training, according to the group's spokesman, Brian Kettenring. He said those who forged registration cards were lazy employees trying to earn money for doing no work, and were fired. Many states require that every collected registration card be submitted to election officials so that bogus cards or those with incomplete information are vetted by voting professionals, not the groups that collect them.[...] During this year's primary Obama's campaign hired a firm with ties to ACORN, for a get-out-the-vote effort. During Wednesday's debate, Obama said ACORN's latest registration drive "had nothing to do with us. We were not involved." In addition, Obama and other lawyers in 1995 successfully represented ACORN in a lawsuit against the state of Illinois to gain implementation of the so-called "motor-voter" law, which made voter registration easier. It is clear that McCain and other Republicans are libeling this organization and spread widespread fraudulent claims against them.

The Washington Post takes on the Republicans' ACORN scam in an editorial today. Be sure to read the whole thing, and send it to friends and family: THE VERY "fabric of democracy," or so Sen. John McCain warned at the final presidential debate, is at stake. "We need to know the full extent of Senator Obama's relationship with ACORN, [which] is now on the verge of maybe perpetrating one of the greatest frauds in voter history in this country," Mr. McCain said, referring to the liberal group the Association of Community Organizations for Reform Now. Mr. McCain's hyperbole about ACORN, which has endorsed Mr. Obama, is unwarranted. [...] Most of what are presumed to be fraudulent registrations can be explained as clerical errors; voting officials routinely check registrations against databases, such as driver's license records, to identify questionable submissions. [...] What Mr. McCain's alarmist attack ignores, however, is the enormous gulf between improper voter registration -- whether fraudulent or merely erroneous -- and actually committing fraud at the ballot box. Evidence of fraudulent voting is scant, though there is always a risk. But there is a far greater risk of citizens entitled to vote being turned away from the polls -- and the real threat to the "fabric of democracy" is the McCain campaign's effort to stir up unfounded suspicions of massive voter fraud, casting unwarranted doubt on the legitimacy of the election. And there is a special place in hell for someone who tries to keep eligible voters from voting. Expect to see it in Mississippi on Election Day, and do everything in your power to expose it. Our Election issue will tell you everything you need to know to help protect the vote.