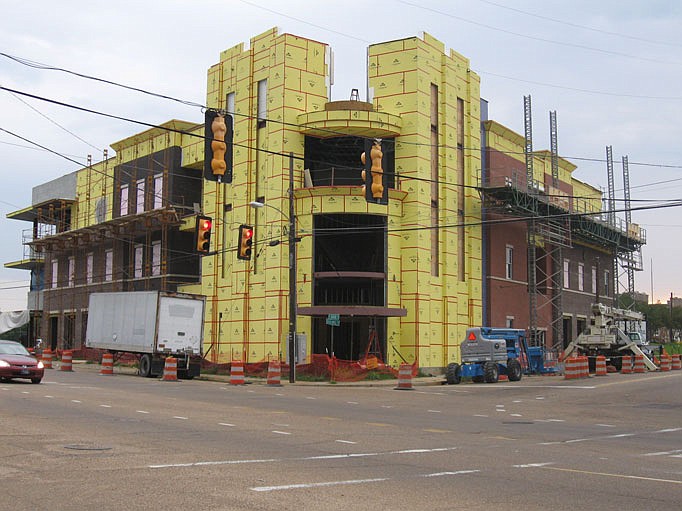 Development in Jackson's Fondren district is zipping along at a sizable pace, with Fondren Place scheduled to feature retailers such as BankPlus and others as early as this fall. BankPlus will occupy about half the ground floor.

Another business looking to squeeze alongside BankPlus is advertising and public relations firm The Ramey Agency. Peters Real Estate representative Sam Peters said the building is also looking at developing a lease agreement with two coffee distributors, though he assures the crowd at nearby Cups that the retailers are not looking to steal patrons.

Peters could not name either of the two retailers weighing in on the location, no more than he could name a second business looking to install a sushi bar on the ground floor of Fondren Place.

"They're working on a name right now," Peters said. "A businessman and a chef are coming up from the Coast and creating a completely new establishment."

Fondren Place is an extension of the development at Duling School, a former Jackson Public Schools building, which will soon contain retail stores and a service restaurant. Antique store The Elephant's Ear is moving its entire operation into the front of the renovated school. Joining it will be Kitchen and Interior Designs. Dottie Gozan, who also owns Gozan Interiors, is already a Fondren employer who said she could not envision her new business being anywhere else.

The Duling building will also house a solo salon and a custom jeweler, though Peters did not have answers on the names just yet.

Nathan Glenn, co-owner of Rooster's and Basil's, two restaurants already located in Fondren, is willing to speak heartily on his own business opening in the old school's auditorium. The name of the new restaurant is appropriately The Auditorium.

"The emphasis of the food will be based on Mississippi. We're talking about southern seafood, seafood platters, stuffed crab, stuffed flounder, a number of grilled fish; then we're moving up to Delta food, including a good quality plate of Delta catfish," Glenn said. "We'll be, first and foremost, a dining place, but we'll keep the original stage and have live music, live cooking demonstrations. We're also talking to a few theater groups."

Glenn said he expected The Auditorium to open its doors, along with many of the other developments, sometime in November. He said he's aiming for Fondren because, he's "just not a suburbanite."

"I love the area, love the flair. It's got a bit of local culture, and everybody knows everybody else," he said.

That flair may be one of the reasons the Duling project is also being considered as a location for one of the more influential hotels in the country. Peters Real Estate is in the final stages of securing financing that will plant a Hotel Indigo along Old Canton Road.

"Intercontinental Hotels Group just came out with this new boutique-brand hotel. This particular brand is very hip, eclectic; they go into the arts and entertainment districts in about 95 percent of the cities that they touch down in," Peters said, saying that the Indigo people were in town looking at another Jackson site before spying the Duling development.

Peters said he expects the hotel's square footage to top 65,000, have 100 rooms and feature four stories. He expects patrons to be an intrepid bunch who like to use their feet.

"The customers they get are the type who don't want to just go to their hotel and stay there, and eat at the same old hotel restaurant. What appealed to them most was the fact that you're within walking distance of probably 15 of the best restaurants in Jackson," he said.

Glenn said one unspoken advantage to any business opening in the Fondren area is the obvious bounce owners get from the crowd migrating from the limitless expanse of the ever-growing University Medical Center.

"You're basically assured patronage from a crowd that would really rather not get in their car and drive to get lunch," Glenn said.

This kind of growth inevitably comes with growing pains. Patrons and business owners alike have felt the pinch when it comes to parking. Last year, business owners in the area sounded off when the owners of Lenny's Sub Shop on North State Street began towing the vehicles of Rooster's customers using the Lenny's parking lot.

Karen Parker, owner of New Vibrations in Fondren, said the parking problem joined with the faltering economy is closing down her store, which will officially end its business at the end of the month.

"I've had several customers at different times a week saying, ‘I circled four, five or six times trying to find a place to park until I just gave up and left,' and those are just the people who are telling me," she said.

Jeff Good, owner of Sal & Mookie's in Fondren, admitted parking would continue to be a big issue. The key to dealing with it, he said, involved trying new solutions.

"The answer is to use creative methods. For instance, I've worked with Alan French on the Fondren Express trolley. I have a bike rack outside of Sal & Mookie's. I ride a Vespa. Reality's reality," Good said.