Where are the Rock Stars? 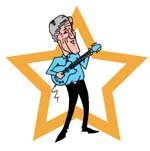 When Judy Coleman was 16, she watched MTV's "Rock the Vote" special "Choose or Lose" religiously. The rock stars sucked her in.

"I thought, 'Hell, yeah! Rock stars care! They think I'm important and they want me to vote!'" she explains. But she's 22 now, and she's a little bit jaded: "It's not as though [the rock stars] actually came to Mississippi in their little bus and tried to get people out to the polls."

Coleman still votes, though she admits long lines deterred her from casting her governor's vote last November. But Coleman doesn't credit MTV's rock-vote extravaganza for her voting tendencies. "I was registered to vote at my high school; it was no effort on my part and took about 30 seconds," she says. "I would say that whatever program registers kids to vote right from their high school is more helpful than Rock the Vote, even if it doesn't have the high profile."

She doesn't shun the program, though, noting: "I still think the program can be helpful, even if it just gets one person to register to vote and then motivates them to actually exercise their right to vote, it's helping."

Lost Cause?
Knol Aust, a 28-year-old Web designer and frequent Rock the Vote volunteer, agrees that Rock the Vote may not be so useful. He says, "I support their endeavors and have been a part of them but feel they often are 'preaching to the choir.'"

Coleman and Aust agree that young voters must be targeted directly—without rock-star tricks or flashy television shows. "Politicians must begin addressing young people directly as voters, taxpayers and, most importantly, future generations that will inherit America's past, present and future," Aust affirms.

Coleman adds: "I don't want to say it's a lost cause, but I think kids who have just turned 18 feel pretty far removed from the whole process. The candidates are usually three times their age, are pretty darn stodgy and talk about things they couldn't care less about."

Eighteen-year-olds, Coleman says, won't respond to constant talk of tax cuts. Many young people still have their parents to refill their pocketbooks and cover health insurance. Social Security seems like millenniums away.

But Rock the Vote is trying to change that, notes Rock the Vote's Washington and political director Hans Reimer. The group is currently petitioning for health-care changes. Intending to present the petition to both Bush and Kerry, the group is hoping to allow young people to remain on their parents' plans until age 26. The current kick-off age for non-college students, and even some college students, is 19. The group is also holding discussions about the draft.

Their efforts are needed, Jerry Landry, a 22-year-old avid voter, says, but he believes that change must come from the candidates themselves: "Third-party agencies like Rock the Vote are all well and good, but if you don't have the elected officials working toward getting closer to the people electing them, then there's only so much that can be done to bridge the gap between elector and elected." Landry explains that the only way to get young people to vote is to "make government real for young people."

Follow Dean's Example
Candidates must reconsider their approaches, he says. In addition to discussing issues closer to the hearts of the young, politicians must include the 18-30 age group in on the process. Former candidate Howard Dean received mass approval from 20-somethings by stressing the importance of even the smallest donations. By setting up meet-ups around the country, Dean brought his race into small towns, closer to young voters not in swing-states, such as Mississippi.

Landry, who was a staunch Dean supporter during the Democratic primaries, explains: "In this election year, we have seen national candidates such as Howard Dean make it a point to reach out to young voters, to address us via our main means of communication, like the Internet, and to start a dialogue with us about how we would like our future to look."

In local politics, though, no two-party candidate has specifically targeted younger voters in a similar way. Last July, then-Gov. Ronnie Musgrove submitted a statement to the Jackson Free Press about young voters, explaining that by bringing Nissan to Mississippi, he had appealed to younger voters.

Musgrove wrote, "I feel that by moving Mississippi forward, improving education, and bringing good paying jobs and opportunities to Mississippi—opportunities that only a few years ago, weren't available—I am addressing the concerns of not just younger voters, but all Mississippians." Though Musgrove may have had younger voters in mind, many 20-somethings feel as if neither he nor Barbour addressed any issues of sole importance to younger voters.

This is typical. "Local candidates tend to focus on issues with families or the elderly and neglect the single/newly married young voter demographic," Landry says. "Twenty years ago, Louisiana faced the same problem as Mississippi and took steps to address the needs of young people through programs such as the college tuition assistance program TOPS. By considering the issues of young people, Louisiana politicians have invested in the future, an investment that Mississippi is currently missing out on," he continues.

Buy Sh*t … and Vote, Too
With these criticisms, non-partisan agencies seem almost superfluous. How can Rock the Vote bridge this gap between local politicians and younger voters? According to Reimer, it already is. The group hosted an open forum between young people and seven of the nine Democratic candidates last November and plans to offer a similar forum of discussion for both Kerry and Bush before this year's election.

Despite this, Rock the Vote has been criticized from both political sides. MediaChannel.org even ran a story stating that Rock the Vote "misses the boat" by focusing less on real issues and more on marketing campaigns, including urging young people to buy corporate products. Perhaps because Rock the Vote is a non-partisan group, their focus on issues pales in comparison to their marketing strategy. Educating youth on real, relevant issues may be divisive to their no-party platform, but the Winterfresh gum and Motorola cell phones the group plugs make voting seem hip.

Michael Abrient, a 20-year-old college student at Millsaps College, believes that Rock the Vote tries to oversimplify politics in order to secure young voters. He says, "You can't rely on any one conglomerate source for your information, and you can't pout around and demand that a thing such as congressional legislature simplify itself so that the girls who watch "TRL" can understand it. Now that's just common sense. And you can't take seriously any news outlet that tries to make the government look fun and cool. The government is not cool. It's boring, boring."

Reimer dismisses these attacks. His team is dedicated, despite any negative publicity. "We're big people and willing to shrug it off," he says. "We get attacked. Someone with a bias who wants to attack us can usually piece together an argument, but they're not necessarily seeing the whole picture. It's a high-profile effort, so it sometimes draws attacks. That's the price you pay to be able to reach young people."

And they are reaching young people, he says. "We're expecting a great youth turnout this year. The numbers of young people planning to vote has surged."

The numbers agree with him. The group has already registered more than 300, 000 new voters this year. Will all 300,000 get to the polls, Winterfresh gum in hand, ready to vote?