[Comedy] Interview With a Bobcat 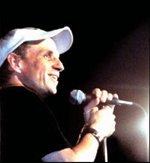 No, no, he's not dead; that was the screamer, Sam Kinison. Bobcat Goldthwaite is the multi-octave wild man known for his role in several of the "Police Academy" movies and the underground alcoholic-clown, in the cult classic "Shakes the Clown." Bobcat is back fresh and touring the national circuit with his first CD of stand-up material in 12 years. And now that Jackson has a nationally recognized comedy club, Rascals is bringing the Bobcat to you this week, July 8-10.

"Sometimes people aren't even familiar that I have a stand-up act," he said. "They come to the show to see the guy from 'Police Academy,' and they're disappointed that I'm not the black guy that makes the funny noises," he said in a recent phone interview.

You're probably wondering what this cat's been up to. His current act and live stand-up CD will get you up to speed in raucous fashion. You may remember his "I can't feel my face" scene in "Blow" with Johnny Depp. He was "Drug Dealer #2." Bobcat's set takes you backstage of "Blow" where he, Johnny Depp and Paul Reubens found themselves comparing criminal records. You don't have to wish to be a fly on the wall; Bobcat tells all, taking his film characters into his stand-up act in hilarious fashion.

"Stand-up comedy is what I do for a living," Bobcat said. "That's what I am, a comedian. I've been lucky to get some parts in movies, but I consider myself a comedian first."

Bobcat is known for being outrageous: He was arrested and had to do some community service TV commercials for setting fire to a chair on "The Tonight Show." He was fired from "Hollywood Squares" for excessive lewdness and swearing at the contestants.

But now he's calmed down … at least a bit, and is more behind the scenes. During the past few years, Bobcat has been behind Comedy Central's cameras writing and directing sketch shows like the "Dave Chappelle Show," "The Man Show," "Strip Mall" and "Crank Yankers."

He created a new film, "Windy City Heat," which is gaining some cult status on the film festival circuit. Tom Kenny who was Blinky the Clown in "Shakes the Clown," and currently the voice of SpongeBob SquarePants, is back in Bobcat's new feature. (In our conversation, I invited Bobcat back to screen the film on behalf of the Crossroads Film Festival, so stay tuned for that.)

"I don't know how I feel about my character at this point in my career. I'm still goofy and have a lot of energy, but I seem a little more straighter, still running off nervous energy," Bobcat said.

The title of his new CD, "I Don't Mean to Insult You, But You Look like Bobcat Goldthwaite," comes from an actual fan approaching him in an airport. What do you say when someone says that? Are you supposed to say, "thank you"? Perhaps its because Bobcat has lost some weight since his "Police Academy" days. He also has less hair, adding to him not getting recognized like the old days. But he is enjoying the anonymity.

Bobcat is engaged to actress Nicki Cox, and spends his off hours turning his teenage daughter onto The Ramones and Velvet Underground. Yes, friends, the Bobcat's has become a straight-shooting family man since his days with Peter Fonda at the Sturgis Motorbike Rally's. "I'm not the life of the party. I'm the guy sitting in the back, making fun of the life of the party," Bobcat said.

Have no fear, though: The polyphonic stand-up still will make you blush with delight all the same, with all the dirty words and lude, crude goodness.

[Correction appended: Goldthwait is misspelled in the print edition. We apologize for the error.]