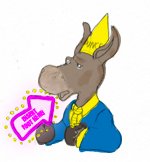 ht>
This past week, The Magnolia Report, the conservative online news site, posted an MP3 clip in which George Dale, commissioner of insurance and a leader of the Mississippi Democratic Party, said on SuperTalk radio that Mississippi's Democratic leadership had specifically sought a "white" chairman in answer to a question about presumptive new party chairman, Wayne Dowdy.

ARTISTS IN ACTION: The Mississippi Arts Commission has granted just over $1 million in funding to 188 artists and arts programs across the state for 2005 to 43 counties. The Commission also approved 29 new appointments to its annual Artist and Arts Education Demonstrator Roster. The roster, updated yearly, lists several of the best artists and arts demonstrators working in the state. Organizations can hire these individuals through grants and the Commission pays up to half of the artist's fee, providing artists with a way to find adequate pay in return for their services.

HEART BELONGS IN INDIE: The folks over at Video Library have always supported independent film (they used to run Deville back in the day before the movie scene in Jackson started to suck), and now they want some of those good old indie-film days back. Starting with "Fahrenheit 9/11," the independent video store will be paying for each of its employees and three of their friends to attend independent films in Jackson to help build a recognizable market for creative movie fare.

TURN OFF THE AIR? The Air-Conditioning and Refrigeration Institute, up in Virginia, has designated July 3-Aug. 15 as Air Conditioning Appreciation Days. In their release, ARI reminds us to give our cooling equipment some TLC before the hottest days of summer are upon us. Go to http://www.ari.org to read the institute's suggestions to keep your equipment running properly and efficiently.

KEEPING FREEDOM ALIVE: The Hinds County Young Democrats will be remembering the Freedom Summer of 1964 this summer with a variety of guest speakers. The group kicked its program off last Saturday with Roy DeBerry, one of the younger freedom fighters in '64 and now a vice president at Jackson State University. Contact Chris Mims at [e-mail missing] for meeting and speaker details.

THEY SAY IT'S YOUR BIRTHDAY: Hal and Mal's Pub Quiz will be celebrating its birthday soon, so make plans now to play some trivia Tuesday, July 13. Even if your trivia knowledge is less-than-par, you can win one of the door prizes the JFP and other local businesses will be giving out.

TEE OFF WITH THE MAYOR: Brush up on those Tiger Woodsian strokes for the Mayor's 2004 Invitational Golf Tournament, on July 24 and 25 at the Sonny Guy Municipal Golf Course. For an entry fee of $200 per team, 68 teams will be allowed to sign up to play. The tournament begins at 9 a.m. on Saturday and will include a dinner that night at the Clubhouse. Hall of Fame songwriter Jerry Chestnut is scheduled to perform on Saturday night. Interested teams should hurry, as the deadline for registering is July 15. Call Sonny Guy Golf Course at 960-1905 or the Department of Parks and Recreation at 960-0716.

NEW MAN AT THE LEDGE: Following publisher Bill Hunsberger's untimely and tragic death, The Clarion-Ledger gets a new leader, just as the Gannett Corp. is ready to move on its new three-day-a-week Rankin newspaper. Ole Miss grad and Jackson native Mike Craft, former president and publisher of The Times in Shreveport, La., will now lead the mega-corporation's efforts to (unsuccessfully) squish locally owned media into extinction. Craft has a long tradition of being moved to various Gannett outlets: He also served as president and publisher of The Jackson Sun (of Tennessee; called the West Tennessee Whig, long before Craft took over), and vice president of marketing at The Des Moines Register in Iowa. We welcome him to the Bold and Restless New City—which we hope he chooses to actually live in, unlike much of the Ledge's upper crust.

HOW DO YOU SPELL ‘PEACE'?: Is your child having difficulty digesting "A Separate Peace"? Then head to the JPS Career Development Center, 2703 First Ave. for a free, parent-oriented workshop from 5:30-7 p.m. Call Jennifer Templeton at 960-8315 for info or to register.

SOMEONE, CALL THE FIRE-MAN: From July 8-10, the Crowne Plaza Hotel will swarm with fire chiefs as the Jackson Fire Department hosts the Southeastern Association of Fire Chiefs 76th Annual Leadership Conference, subtitled "When Disaster Strikes." This is the first year JFD will host the event, providing yet another chance to show off Jacktown to outsiders.