[Colleges] This is Your Life, Baby 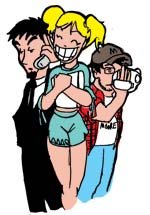 It's 8 in the a.m. on your first official day of college, and you and several hundred of what you hope will become your closest friends are gathered in the gymnasium watching your freshman orientation leaders (OL) sing and dance.

They're performing a catchy little number called "Yes, Smoking's an Open Flame Violation, Too," but you're not really sure what point they're trying to get across.

You're dead tired from all that, er, studying you did last night. For all those classes you're taking. That start in half a week.

The show's over before you know it, and you're being split into groups. Divide and conquer, you wonder, but play along. What could this be?

After a short speech from your OL, you're instructed to form a tight circle. First, you go around the circle and state your name, hometown, major and, um, rank, and then a small girl from Alabama is ushered into the center of your group. She closes her eyes and falls on you. You almost drop her, but manage at the last second to shove her across the circle where she is promptly shoved in a different direction. Your group keeps the girl ricocheting in different directions for a good minute before the OL lets her open her eyes and rejoin the circle. You feel a hand on your back and before you know it you're closing your eyes and falling backward. You can't remember anyone in your group's name, but you sure, um, trust them.

Your newfound camaraderie in tow, it's off to the club fair. All the school's student-run organizations have their own tables and banners on display, their makeshift brochures set out like hors d'oeuvres, ready to be swallowed whole by 18-year-old fresh meat, er, freshmen.

Look there! The women's lib table is playing a round of mad libs. The (man) looked at her (sandwich) and licked his (lips). Not quite the misogyny you'd been hoping for. Maybe you're not ready for that free Gloria Steinem puppet just yet.

The young Democrats have certainly made their presence known with the glossy stickers they've plastered to their table, not to mention countless bathroom stalls all over campus. "Because there's no such thing as a nice piece of elephant!" scream their T-shirts, as anxious little liberals pin "health care," "environment" and "surplus" to a paper donkey.

The sorority girls are all picket-fence smiles.

The "Students for the Height-Impaired" table is bright red, Fisher Price, and being hunched over by four feet and five inches of pure rage.

The young filmmakers' society is crowded behind a 35mm camera, intently focusing in on a brown paper bag as it falls from the top floor of the library (and the hands of the football team's star receiver, no less) and descends onto the table of the conservationist group, "Save the Trees, Please."

If you're not utterly bewildered or frightened, stay awhile. You may never confront such bright-eyed (sometimes belligerent) belief anywhere else.

That's right, this is a microcosm, and it's the next four years of your life, baby. Get used to it, because it's going to be the best of times, the worst of times and everything in between. This is college. Consider yourself oriented.